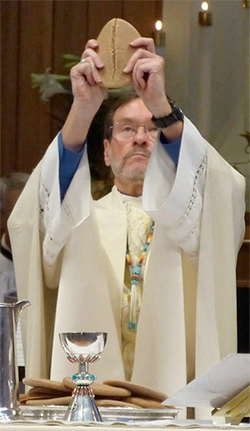 The Rev. Stephen James Keplinger (who likes to be called "Steve") began his ministry at Grace St. Paul's on Sunday, Sept. 12, 2010.

Born and raised in Baltimore, Steve spent the majority of his life in the state of Maryland, with a short stint in the mountains of West Virginia. All that changed after his first trip to the western United States, where he fell in love with the landscape, especially the red rock deserts of southern Utah and northern Arizona. After a raft trip down the Colorado, and his first night under a sky brilliant with thousands of stars, he determined to move west.

Nine months in southern California was followed by a move to St. George, Utah. Living between the Grand Canyon and Zion National Park, Steve spent much time in the midst of the desert landscape, writing about that experience for local papers and a few national magazines. During those years he was employed in administrative and sales positions, ending as sales manager for a printing company. 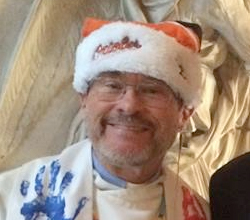 Steve's spiritual journey led him to the Episcopal Church in 1986. After growing up in the Roman Catholic tradition, it became obvious to him through a series of experiences at the Episcopal Church in St. George, that this was his home. After years of discernment, he entered Church Divinity School of the Pacific in the fall of 1997. He then spent two years of seminary commuting to the Episcopal Theological School in Claremont, Calif., before returning to CDSP to finish his studies. He completed his Master of Divinity program at the end of 2000 and was ordained in August 2001. He began serving at St. David's Episcopal Church in Page, Ariz., (Diocese of Utah) in January 2001.

Steve has a passion for creative liturgy, social justice and outreach and church growth and development. We appreciate the gifts he brings us at GSP!